A case of Foot and Mouth Disease (FMD) was confirmed on a commercial stud farm in North West province. The Provincial Veterinary Services conducted epidemiological investigations following reports and a positive laboratory results and have confirmed the diagnosis. The farm and other linked farms have been placed under quarantine while further surveillance in the area is being conducted to determine the extent of the outbreak. A Joint Operations Commission, supported by the local MMCs for Safety and Security, the Provincial Disaster Risk Management Committees of both Dr Kenneth Kaunda and JB Marks was established and its first sitting was on Sunday 20th. All present at the JOC pledged their unwavering support for the control of this outbreak.

Furthermore, an outbreak of Foot and Mouth Disease (FMD) was detected in the previous FMD free zone in Collins Chabane municipality (Vhembe) in Limpopo Province in March 2022. Infection was detected in two locations in the former FMD free zone and involves cattle in communal grazing areas. One of the two new infected locations is in the Disease Management Area, which was declared in January 2019 and remains in place, while the other is north of it. Other locations in the area with clinical signs suggestive of FMD are under investigation.

This outbreak is most likely due to spill-over from an outbreak in the adjacent FMD Protection zone, which was detected in March 2021. There are permanent movement restrictions in place in the protection zone, preventing the free movement of cloven-hoofed livestock into the FMD free zone. The affected diptanks were placed under quarantine and no cloven-hoofed animals were allowed to move from these locations.

In an effort to curtail the spread of the disease, cattle were vaccinated to establish a band of resistant animals around the known positive diptanks. Based on surveillance activities conducted in the second half of 2021, it appeared at the time that the infection had come to an end. However, it resurfaced in 2022 in the former FMD free zone. 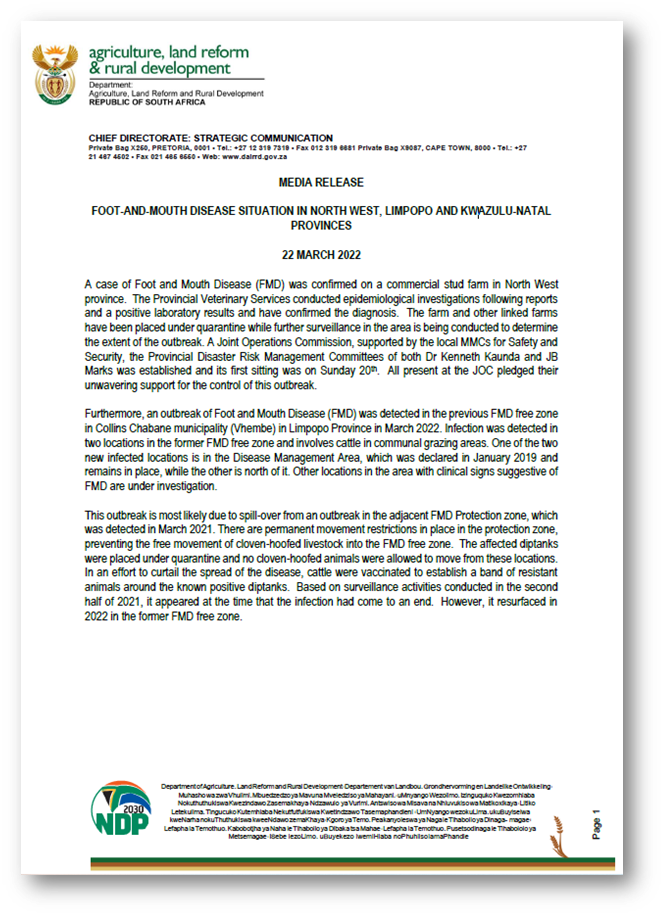