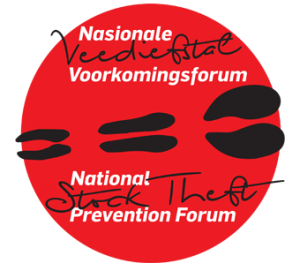 The release of the crime statistics by the SAPS on 3 March 2017 to the Portfolio Committee was awaited with enthusiasm as it is the first time in years that crime statistics are made available on a quarterly basis.

The major challenge on these statistics is that for so many years crime statistics were only provided per year. The release of the statistics now in a tri-mester period do not provide for the opportunity to really make comparisons and make conclusions. What will be done is to provide the view from the National Stock Theft Prevention Forum (NSTPF).

The statistics presented to the Portfolio Committee on 3 March 2071 established an increase of 2% for the past tri-mester. It is observed that there are increases in livestock theft in the Eastern Cape and Free State with unprecedented increases in North West, Mpumalanga and Gauteng. The number of cases in the Eastern Cape and the Free State are much higher than those in the other three provinces and therefore the extent of stock theft is much more severe.  Furthermore, it is further common trait that the provinces with the most cases reported, are the Eastern Cape, Free State and KwaZulu-Natal. From the NSTPF’s side, the need for research on this matter cannot any longer be delayed.

The crime statistics cannot be viewed in a vacuum as there are many other variables that needs to be taken into account.

When viewing crime statistics, and more specifically property crime, it is imperative to make a comparison with the Victims of Crime survey released on a yearly basis by Stats SA. The Victims of Crime survey for 2016 by coincidence was released on 14 February 2017.  The trait that a large number of property crimes are never reported to the authorities in South Africa, is a fact when viewing table 1.

Non-reporting of livestock theft according to the information in table 1, is constantly on the increase since 2011 and reaching unacceptable levels. The fact that the crimes are not reported needs to be flashlights as society have lost faith in the whole of the criminal justice system.

The current statistics of the SAPS and Stats SA with an increase of 3% in non-reporting and a 2% increase in livestock theft underlines the argument of lies, damn lies and statistics. The matter will be discussed at the next NSTPF and possible solutions be sought.